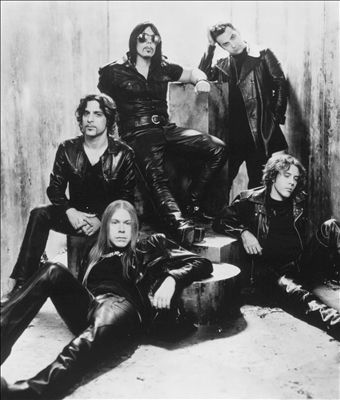 Monster Magnet are a seminal Stoner Rock/Stoner Metal band (technically slightly different things, but they count as both), who have had significance influence on the genre. They're also one of the most commercially successful and popular of Stoner bands, and are well-known for the semi-hits "Negasonic Teenage Warhead", "Space Lord" and "Powertrip".

Their music combines 70s-style Heavy Metal and Hard Rock with Psychedelic Rock and Space Rock, as well as Doom Metal and Grunge influences. They're known for their rather nonsensical lyrics, as well as their loud, grindingly heavy (and memorable) riffs and Wyndorf's wailing voice.

Formed in 1989 by main man Dave Wyndorf, John McBain and Tim Cronin, after releasing a demo and a single, they then expanded to a five piece and produced more demos and their self-titled EP (on an obscure German label, oddly enough). Cronin left shortly after, though the next couple records credit him as a "creative consultant" in various hilarious ways. They released their cult classic first album, Spine of God, in 1991 on the slightly larger Caronline Records. After this, they went on tour with Soundgarden, which got them signed to Soundgarden's label, to boot. Their final release on Caroline was Tab, a 50-minute collection of long jams that the band calls an EP for some reason.

They released a strong of 4 albums on A&M that expanded their fanbase significantly and helped them come to be known as a key band in the emerging Stoner movement (alongside Kyuss and Sleep). Of these, Dopes To Infinity and Powertrip were the most successful, spawning the minor hits "Negasonic Teenage Warhead" (with a video memorably spoofed on Beavis And Butthead) and "Space Lord" (the band's breakthrough song), respectively. Just before the recording of Powertrip (the band's first gold record and best-selling album), they added another guitarist, Phil Caivano. However, after just one more album, they found themselves dropped from A&M due to their inability to follow "Space Lord" up with another similarly large hit. Calandra and Kleiman quit shortly thereafter.

In spite of the setbacks, Monster Magnet managed to replace the lost members (with Jim Baglino and Michael Wildwood, though Wildwood was quickly replaced by Bob Pantella) and even managed to record the theme song of WWE superstar Matt Hardy. In 2004, the new lineup released Monolithic Baby! on SPV and had another (minor) hit with "Unbroken (Hotel Baby)". In 2005, Caivano left amicably. This was followed by Wyndorf's near-death in 2006 due to a prescription drug overdose. Thankfully, he got over it.

The band released 4-Way Diablo the next year and Mastermind in 2010, the latter on Napalm Records (another new label). Mundell left (on good terms with Wyndorf) in 2010, and was replaced by Garrett Sweeny. Also, Caivano returned in 2008. With the release of 2013's Last Patrol, the band began fusing the more hard rock-oriented style they had been performing since Powertrip, with the space rock stylings from earlier in their career. The following year, they released Milking the Stars: A Re-Imagining Of Last Patrol, an Updated Re Release of sorts that took the material from Last Patrol, altered the production as well as instrumentation to make it sound like a space rock album from the 1970's, and threw in a few original tracks in the same style as well as a couple live performances. This formula was so well-received that the year after, they gave Mastermind the same treatment with Cobras And Fire: The Mastermind Redux.

Oh, and if one of their song titles seems familiar to you, it should: Grant Morrison gave one of their new characters in New X-Men the codename Negasonic Teenage Warhead after the Monster Magnet song.

Bandmembers (past and present) include:

Tropes that apply to Monster Magnet: