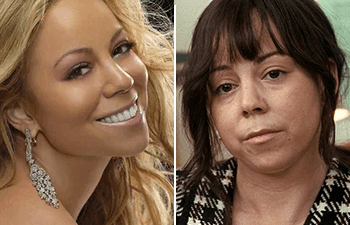 For her role in Precious, Mariah Carey went from diva to drab.
"An actress known to be good-looking who plays a role which calls for her to indulge in a makeup that makes her look homely usually gets flattering notices from the reviewers, even if her performance isn't worth a nickel[.]"
— George Jean Nathan
Advertisement:

An actor or actress known for their physical beauty being altered by makeup and prosthetics to play an unattractive or even ugly character, usually as Oscar Bait. This doesn't cover really deformed or monstrous characters like Freddy Krueger or Quasimodo; that would be The Grotesque.

Note: This is different from Hollywood Homely, where an actor or actress will be "plained down" with unflattering clothing or hairstyle, glasses, a better-looking sibling, crippling shyness hiding their looks or so on, but the result is only (maybe) average-looking by non-Hollywood standards. A Hollywood Homely character can quite easily be changed in-story to the actor's normal appearance for a Beautiful All Along reveal. This trope, instead, is when the actor uses makeup or prosthetics to change the look of their face to match the expectations and image of the character.

This trope usually happens in biopics and serious dramas, and covers attractive actors playing below average-looking characters (or real people), and there is a definite effort to not only play down but deliberately counteract the actor's usual good looks. Since most Hollywood actors tend to be very attractive, it's an interesting challenge for them to portray a Gonk. Compare with Unkempt Beauty, which is more along the lines of "the less makeup you wear, the better you look."

If they're playing outright monsters who are usually portrayed as ugly, this may result in a Gorgeous Gorgon.

See also Dyeing for Your Art, which generally covers actors who change their appearance for their roles. Contrast with Adaptational Attractiveness.