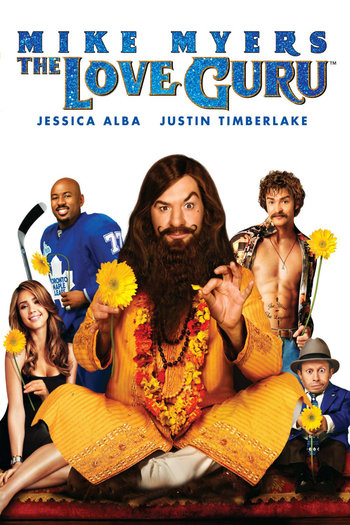 "His karma is huge."
Advertisement:

The Love Guru is a 2008 comedy film and the first major live-action big-screen performance from Mike Myers since the Austin Powers trilogy.

It's the story of an American-born but Indian-raised self-help guru named Guru Pitka (Mike Myers), whose dream is to surpass the famous Deepak Chopra as North America's number-one, go-to self-help guru. To do this, Toronto Maple Leafs manager Jane Bullard (Jessica Alba) ropes him in to help hockey player Darren Roanoke (Romany Malco) regain his confidence before the big game, as it has been severely shaken since his wife Prudence (Meagan Good) left him for his hockey rival Jacques "le Coq" Grandé (Justin Timberlake).

It also featured prominent performances from Verne Troyer, Stephen Colbert and even Sir Ben Kingsley, but none of it spared this largely scatological comedy from being condemned by both audiences and critics. Despite expectations that the film would revive Myers' career — he hadn't toplined a live-action film since 2003's The Cat in the Hat — it became one of 2008's biggest flops and nominated for a whopping seven Razzies. It won three, for Worst Picture, Worst Actor, and Worst Screenplay.