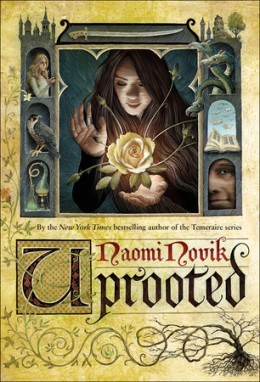 "Our Dragon doesn’t eat the girls he takes, no matter what stories they tell outside our valley. We hear them sometimes, from travelers passing through. They talk as though we were doing human sacrifice, and he were a real dragon. Of course that’s not true: he may be a wizard and immortal, but he’s still a man, and our fathers would band together and kill him if he wanted to eat one of us every ten years. He protects us against the Wood, and we’re grateful, but not that grateful."
Advertisement:

Agnieszka lives at the edge of the Wood, which as the quote above suggests is not the safest place. Her village, and others at the edge of the Wood, are protected by The Dragon, a wizard who — every ten years — picks a girl to serve him for the next ten years. They're sent back with money for their dowries, but none ever stay in the villages after.

This year, everyone is sure Agnieszka's best friend Kasia is going to be picked. However, considering that Agnieszka is the Character Narrator... you can see where this is going.

The book is written by Naomi Novik, who is more famous for the long-running Temeraire series. Unlike that, this book is a standalone.

Ellen DeGeneres has purchased the rights to produce a feature-film adaptation. Naomi Novik has since written and published a Spiritual Successor, Spinning Silver which does not share a setting but does share theme and tone with Uprooted, this time tackling Rumpelstiltskin.