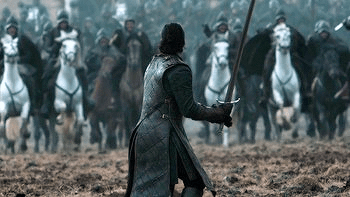 "I will not sacrifice the Enterprise. We've made too many compromises already, too many retreats. They invade our space, and we fall back. They assimilate entire worlds, and we fall back. Not again. The line must be drawn here! This far — no farther!"
— Captain Jean-Luc Picard, Star Trek: First Contact
Advertisement:

You and your mates face your foes. They may be equally matched or they outnumber you. However your leader decides that if a fight is to break out, everyone's to stand their ground and not run away. There's a choice of running away, but defeat in any form or fashion means humiliation and dishonor. Or in other cases, you simply just die a dog's death. The only honor is in victory.

Frequently combines with In Its Hour of Need — if the person giving the order has any honor.

A cousin to the Last Stand. Related to Hold the Line. Compare Tired of Running. Contrast Tactical Withdrawal and Run or Die, where he who fights and runs away lives to fight another day.