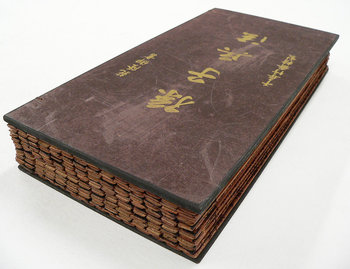 18th century copy of The Art of War on traditional bamboo slits.
"War is a matter of vital importance to the state; a matter of life and death, the road either to survival or ruin. Hence, it is imperative that it be studied thoroughly."
— Sun Tzu
Advertisement:

The Big Book of War.

The Art of War (孫子兵法, Sūn Zǐ Bīng Fǎ) is a short Chinese text on warfare, written by Sun Tzu (birth name Sun Wu, Tzu/Zi is an honorific meaning "Master"), believed to have been a general of the nation of Wu during the Spring and Autumn Period (722–481 BCE). In it, Sun gives a basic overview of both strategy and tactics that has given countless generations of military leaders and thinkers a basic grounding in military theory.

The text's surprisingly general and generous overlaps with military-minded common sense go a long way to explain its popularity and universality. Sun maintains the importance of knowing one's enemies and oneself, striking at the enemy's weaknesses with overwhelming force, concealing one's own weaknesses, and the general importance of deception to military operations. Also covered are how to fight on different types of terrain, the use of fire, and the importance of spies. Perhaps surprisingly, the opening essay stresses the undesirability of going to war at all, and how wars should be brought to a conclusion as quickly and brutally as possible. Unlike most military books then and since, it is not written to be specific to the time and place of its writing. It contains only one passage that is specific as to the cost of maintaining troops, for example. Instead, the book is deliberately very broad, intended to apply almost any time, any place, for any kind of army. Hence its continuing applicability today.

The Art of War is easily the best-known military book ever written, and is still one of the most influential. Numerous translations are available, most of which include at least a few commentaries and annotations (in fact, without the annotations, introductions and footnotes, The Art of War is surprisingly short)note At its creation, the book most likely was written on bamboo slips

since paper hadn't been invented yet, and could have been quite a Doorstopper in its own right. It is required reading in many militaries even today, and some Korean and Japanese corporations require their employees to read it and apply its lessons to the world of commerce. Napoleon is said to have had a well-used copy in French, and the WWII US general Douglas MacArthur is known to have taken its teachings to heart. It is also required reading in many executive business courses; make of that what you will. There's even a story in the Comic Book The Question where the eponymous hero and Green Arrow fights some bad guys while quoting the book throughout. Also, Sabaton recorded a Concept Album of same title based on the book in 2010.

Due to this connection to the spheres of power, wealth and glory, it has an unfortunate tendency to be treated in modern media as some sort of magic or occult science close to magic. It is not and never was (ironically, Sun Tzu insults superstition and magic within his own book, and says to rely on information gathering and calculations instead). Many people have reached the same conclusions as Sun himself, never having read the book. The strategic successes gained from following the advice outlined by Sun 2,500 years before the modern age ultimately prove that there is one core lesson to take from the work: failing to think beyond immediate goals and consequences usually earns you a quick end, and the same for anyone who follows or depends on you.

Sometimes mistaken for The Thirty-Six Stratagems, another piece of ancient Chinese instruction on warfare, which Sun Tzu most likely did not write himself (although some of the strategems are attributed to him, or espoused in Art of War), but can be considered as a companion piece.

It is available online in several places; here

is a copy with accompanying discussions. This is the 1910 translation (with commentaries) in plaintext

Sun Tzu's The Art of War provides examples of: