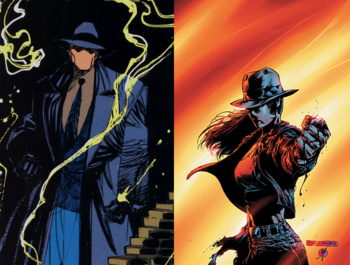 Good Question.note Left: the Question I (Charles Victor Szasz/Vic Sage) Right: the Question II (Renee Montoya)
"I will gather evidence — document every foul lie. I will forge my manifesto. My challenge to any free mind that may find it. Like a note in a bottle. Cast into the ocean. [...] The mind of man must be reclaimed — if not by this generation or by the next, then some day. Some decade. It is not in my power to affect the change. I haven't the might. I am not the answer. I am only the Question."
— The Question I (Victor Sage), The Dark Knight Strikes Again
Advertisement:
"You're going to find, like Sage did, that some questions can only be answered by wearing a mask. Just as there are some that can only be asked when you remove one."
— Richard Dragon to Renee Montoya (The Question II), 52

A classic Charlton Comics character created by Steve Ditko who later migrated over to DC. The Question first appeared in the backpages of Blue Beetle vol. 5 #1 (June, 1967). Vic Sage was a television reporter for Hub City note  the considerably less corrupt "Crown City" in the original Charlton comics when he was visited by his friend and former professor Aristotle "Tot" Rodor, who had invented an artificial skin he called "pseudoderm." Unfortunately, Tot had discovered that pseudoderm occasionally became toxic when exposed to open wounds and he decided not to produce or distribute the material. His partner decided to continue to manufacture pseudoderm anyway and, to stop him, Tot provided a "mask" of pseudoderm to Vic to use in his investigations. Thus the Question was born.

Most early stories tended to show the Question mainly as a mouthpiece for Ditko's Objectivist philosophy, similar to his Mr. A stories, but blunted a bit for more commercial appeal. For instance, The Question once knocked some crooks into a fast moving sewer flow and refused to pull them out as they were clinging for dear life, but left to call the police to go and get them out.note  This was considered highly controversial at the time, during The Silver Age of Comic Books. Like most Charlton comics, it folded when the company went under and was bought by DC. When DC decided to reboot some of the characters it had acquired from Charlton it was decided that the Question was to get a whole new image for his next series, which debuted in 1987.

In the beginning of Dennis O'Neil's series the Question is viciously beaten by Lady Shiva, then shot in the head with a pellet gun and Left for Dead. Shiva, however, deeply respects him enough to rescue him, taking him to train with Richard Dragon, who also provides him with a new Eastern philosophical outlook that gives him a more nuanced morality. When he returns to Hub City he finds his old flame Myra is now married to the drunken mayor and the crime is worse than ever. O'Neil's series has mostly been collected into six trade paperbacks.note Only the quarterly issues and the annuals remain uncollected.

Eventually, after a few years he decides to leave Hub City. He reappeared in 52 as the mentor to Renee Montoya before revealing that he was dying of lung cancer. He died in issue #38 (March, 2007). Renee assumed the mantle of the Question in issue #48 (June, 2007), with the help of Tot and Richard Dragon. She continued the mission he had been working on before his death: Investigating the Religion of Crime and Intergang. She appeared in two limited series, The Question: Five Books of Blood and Final Crisis: Revelations, and eventually became the second feature in Greg Rucka's Detective Comics. While combating Vandal Savage in the Detective Comics feature Renee was forced to take from him the "Mark of Cain," supposedly the mark placed by God on Cain to forever label him as a murderer and an eternal subject of ridicule and scorn. The 2010 Detective Comics annual edition revealed that she had indeed been marked. She now bears a scarred cross on her face and is viewed with shock and distrust by all she meets, but she has refused the offered means of removing the Mark, either giving it to another or committing suicide, as her tenure as the Question has given her maturity, outlook and philosophy to handle the Mark.

In the New 52, the Question was completely reinvented, appearing in the Free Comic Book Day one-shot as one of the beings on the Rock of Eternity, punished along with The Phantom Stranger and Pandora for undisclosed sins. His punishment is that his name and face will forever be forgotten; that's not a mask any more. Funnily enough, being supernaturally driven to uncover conspiracies and questions surrounding his own identity and various other nefarious goings-on actually puts his character in practice closer to the JLU version. Renee also appeared in the New 52, but her tenure as The Question was retconned and she had transferred to the Blüdhaven Police Department. Vic Sage was also introduced as a character apparently unrelated to the unnamed Question, as Amanda Waller's boss in Suicide Squad.

The Vic Sage Question also appeared in Justice League Unlimited voiced by Jeffrey Combs in which he was a fan favorite. Indeed, while Question had been around for decades before JLU, it was his appearances there that skyrocketed his popularity amongst comics fans. He also appeared as minor character in Batman: The Brave and the Bold voiced by Nicholas Guest but had a larger role in the spinoff film, Scooby-Doo! & Batman: The Brave and the Bold, where he was again voiced by Combs.

Renee has appeared in the Injustice: Gods Among Us prequel comic, and was the main character in a Convergence mini series. She also had brief appearances during a few issues of Detective Comics during the New 52 and DC Rebirth eras.

Also, the character of Rorschach in Watchmen started out simply being The Question, until DC vetoed the use of existing characters and Alan Moore was forced to create an original Objectivist conspiracy theorist instead. As a Shout-Out, one issue of the Denny O'Neil run has the Question reading Watchmen and commenting on Rorschach's methods—then trying them and getting his ass kicked, ultimately concluding, "Rorschach sucks."

Renee Montoya made her film debut as a major character in Birds of Prey, played by Rosie Perez, though she doesn't assume the identity of the Question during it.

Which tropes do the Question include? That's a good question:

open/close all folders
Who is The Question?
Who is Vic Sage?
Who is Renee Montoya?
Who is The New 52 Question?
Feedback