Comic Book / Injustice: Gods Among Us 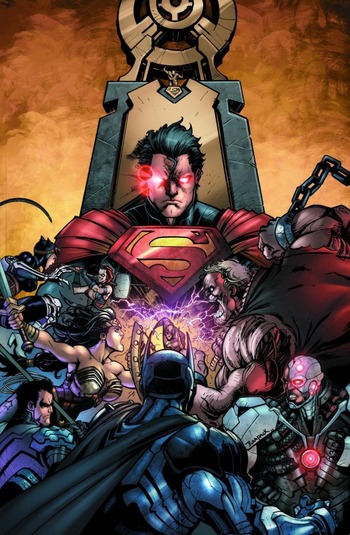 It's the End of an Era.
"Gotham has fallen silent. The night is no longer broken by the sounds of crime. Children are no longer woken by the sudden crack of a gunshot. There are no more cries in the darkness. No tires screech as wailing sirens chase desperate men and women through narrow streets. In a way, it is the Gotham I always dreamed of. But this is no dream. This is a perversion. This is a nightmare. It is the silence of fear. It is a silence only broken by the sound of marching feet. A sound that echoes around the world. Marching feet. The rhythm of dictators. Our world is now ruled by the iron fist - of a man of steel."
— Batman
Advertisement:

Injustice: Gods Among Us is a digital-first comic book series published by DC Comics and part of the Injustice franchise beginning in 2013 and running until 2016. It is a prequel to the video game of the same name, detailing the five-year time skip between the game's prologue and main story.

In an alternate continuity, The Joker orchestrates an event that claims millions of lives and drives Superman to his breaking point. Hoping to eliminate all crime and violence everywhere and prevent further such tragedies, the Man of Steel forms a worldwide Regime with the aid of several other superheroesnote  Cyborg, the Flash, Green Lantern (Hal Jordan), Hawkgirl, Raven, Robin (Damian Wayne), Shazam, and Wonder Woman and declares himself leader. Batman, however, sees this as a gross abuse of power and forms his own group, the Insurgencynote main members include Batwoman (Kate Kane), Black Canary, Black Lightning, Catwoman, Harvey Bullock, Captain Atom, Barbara Gordon (as both Oracle and Batgirl), Jim Gordon, Green Arrow, Huntress (Helena Bertinelli), Martian Manhunter, Nightwing (Dick Grayson), and Renee Montoya , to dismantle the Regime. Many people, costumed and civilian alike, die in the process.

The comic is split up into five "Years", each with a different focus note The numbering here is based on the digital issues; the print versions of the series each collect two digital issues (except for Year One, which collects three digital issues per print issue), resulting in, of course, half the number of print issues:

The digital issues of the series were released weekly, while the print issues arrived monthly.

From the start of the series all through its run, it was consistently one of DC's bestselling digital titles.

Years One and Two and half of Year Three were written by Tom Taylor; Brian Buccellato took over writing duties from then on, though Taylor did return for the Year Four Annual.

The Injustice: Gods Among Us comic has the following tropes: