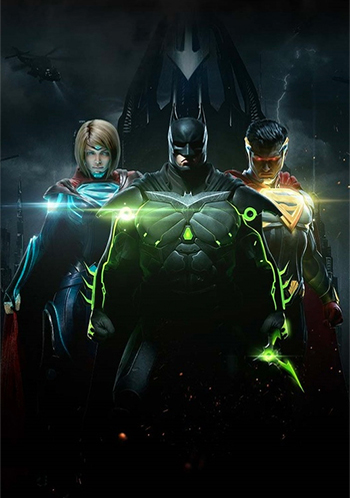 Every Victory. Every Defeat. Every Battle Defines You.
"Curious, how lines once cleanly defined become blurred. Perhaps it is time for them to be...redrawn."
— Brainiac
Advertisement:

Injustice 2 is the 2017 DC Comics Fighting Game sequel to Injustice: Gods Among Us, developed by NetherRealm Studios for PlayStation 4, Xbox One, Android and iOS. The game is slated to have the largest playable roster of DC characters in any video game adaptation thus far and have several others added through DLC following the initial release. Premiere Skins, some of which will be included in the base game and others will be included as part of the DLC wave of the game, will also be included as alternates to existing characters.

The game picks up in the Dystopian Alternate Universe from Injustice, with Batman and his allies trying to put society back together while still fighting against those who put their faith in the fallen Superman's former tyrannical regime. But when a new enemy emerges in the midst of the chaos, their three-way war threatens to put Earth’s very existence at risk.

, "The Lines Are Redrawn" Story Trailer

As with the previous game, a comic series was released by DC to provide an in-depth Back Story to the events of the game.

Example of:
My Greatest Failure