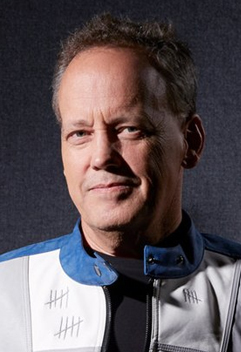 "There’s a specificity to [voice acting]. It’s not a generic character, as none of the characters are. That’s why you love them, that’s why you love this world, it’s not a knockoff, it’s not a boilerplate. There’s a specific vital life to this world that you want to step into and these characters that you want to play with, and to be with, and to meet, and that’s what we bring."
— Dee Bradley Baker
Advertisement:

He's mostly known as the voices of Perry the Platypus, Appa & Momo, Numbuh 4, Squilliam Fancyson and Bubble Bass, Waddles, and Klaus. He's also known in the Star Wars CGI series’ as the voice of the Clone Troopers — all of them.

Chances are very high that you've heard him, even if you don't know it. He also has a very helpful site

for aspiring voice actors, which many of his fellow performers credit as THE guide to voice acting.

Sunny Jim says this to justify his misogyny to Darlene Spritzer.

Example of:
Don't Be Ridiculous

Sunny Jim says this to justify his misogyny to Darlene Spritzer.