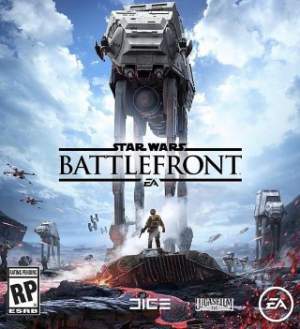 Star Wars Battlefrontnote Yes, it's the actual spelling instead of "Star Wars: Battlefront", to distinguish it from the 2004 game is an action first- and third-person shooter video game based on the Star Wars franchise. The third major release in the Star Wars: Battlefront series, it was developed by EA DICE and published by Electronic Arts. Despite this, it's not considered a sequel to the previous games, but rather a reboot. It was released for Microsoft Windows, PlayStation 4, and Xbox One in November 2015.
Advertisement:

The game takes its maps and characters from the Original Trilogy, though various elements from the Expanded Universe and Prequel Trilogy can be found with a keen eye. Game modes include straight-up Team Deathmatch, a battle against Imperial AT-AT's, and matches revolving around teams of Rebel and Imperial movie characters battling it out. Though the game sticks to the era of the Original Trilogy, it does not stick to any sort of canon, instead giving players a sandbox with Original Trilogy elements and only vaguely referencing the events of the films. This means that Greedo can interact with the player despite Han already being a member of the Rebellion, and Darth Vader and Emperor Palpatine being playable on maps set after Return of the Jedi.

The first DLC was released alongside the game, the Battle of Jakku, which is the setting for a pivotal battle set after Return of the Jedi and leading into The Force Awakens. The second DLC, released in March 2016, is set in the Outer Rim in locations such as Jabba the Hutt's palace. The third DLC, released in June 2016, takes place in Bespin, the location of Cloud City. The fourth DLC, released September 2016, is focused in and around the Death Star, and the fifth and final DLC is a tie-in to Rogue One.