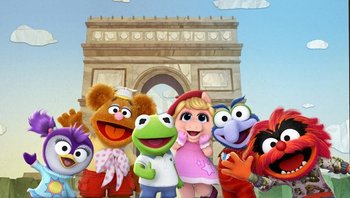 The show follows the basic premise of the original, with baby versions of the Muppet characters going on all sorts of adventures in the nursery while under the care of Nanny (now known as "Miss Nanny"). They use the power of imagination and creativity to solve any problem (let's say this reboot is basically the 1980s original meets The Backyardigans). The target demographic of 4-7 year old children is still the same.

With that said, there are some differences. As opposed to the hand-drawn animation of the original, this show is in CGI, fitting in with other modern Disney Junior shows. Also, this series has two 11-minute episodes per runtime.

The main cast is as follows:

In addition, there is a new character joining the babies named Summer Penguin, voiced by Jessica DiCicco.

A number of other well-known Muppets also appear in recurring roles. Most prominent are Camilla the Chicken, who lives in a chicken coop on the back yard with two other chickens, Priscilla and Beep; Statler and Waldorf (Bauza and Danner), the next-door neighbors who often watch the goings-on from their own house, whose balcony resembles the one at the Muppet Theater; Rizzo the Rat (Diskin), who lives in a hole in the wall and occasionally shows up to play; Bunsen and Beaker (again, Bauza and Danner), who come to visit every now and again, and Sweetums (Baker), a friendly, kind monster. Other Muppets can often be seen in small cameos or pictures on the wall.

The show is executive produced by Tom Warburton (creator of Codename: Kids Next Door, and supervising director for Fish Hooks and The 7D) with Eric Shaw (SpongeBob SquarePants, WordGirl, Arthur, My Friends Tigger & Pooh) serving as the show's story editor. The first episode is available

for copyright infringement and fraud, saying that they didn't offer him a chance to work on the reboot or pay him for his original ideas. Disney retaliated that Scott has nothing to back up his claims, and filed a motion to dismiss in January 2021.