Film / Shang-Chi and the Legend of the Ten Rings

Spoilers for all Marvel Cinematic Universe works preceding this one, specifically Iron Man 3, All Hail the King, and Avengers: Endgame, will be left unmarked. 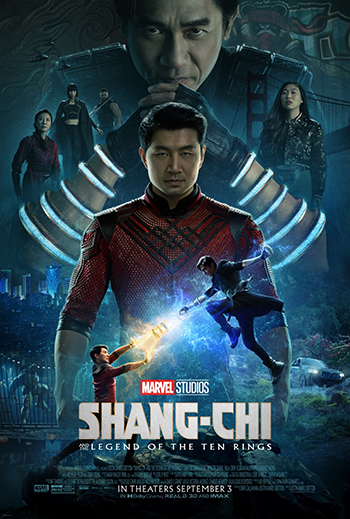 "You can't outrun who you really are."
Xu Wenwu: I always know where my children are. I gave you ten years to live your life. And where did that get you? Now it's time for you to take your place by my side.
Xu Shang-Chi: That's not going to happen.
Advertisement:

Shang-Chi and the Legend of the Ten Rings is a 2021 superhero/martial arts film directed by Destin Daniel Cretton and written by David Callaham, based on the Marvel Comics character Shang-Chi. It is the 25th theatrical film and the 29th overall entry of the Marvel Cinematic Universe, and the sixth installment of Phase 4.

The film introduces Xu Shang-Chi (Simu Liu), a skilled Chinese martial artist who's tried to create a normal life for himself in San Francisco. He finds himself forced to confront his past once his father Xu Wenwu (Tony Leung Chiu-wai) - the mythical basis of Aldrich Killian's "Mandarin" persona - tries to draw him back into his criminal organization, the Ten Rings, named after the magical combat artifacts he owns.

The cast also includes Awkwafina, Meng'er Zhang, Michelle Yeoh, Ronny Chieng, Fala Chen, and Florian Munteanu. The film released exclusively in theaters on September 3, 2021, making it the first Phase 4 installment not to debut on Disney+ in any capacity. The film was Marvel's first to have a 45-day theatrical window before being eligible to premiere on post-theatrical platforms, and eventually started streaming as part of the Milestone Celebration for the platform on November 12, 2021. A sequel was announced

in December 2021, with Cretton set to return as writer and director. Cretton has also been tapped to direct Avengers: The Kang Dynasty down the line.

Shang-Chi and the Legend of the Ten Rings provides examples of:

open/close all folders
Tropes A to D
Tropes E to L
Tropes M to R
Advertisement:
Tropes S to Z
"Welcome to the circus."
Feedback

Wenwu trounces the enemy army and breaks open their fortress using the power of the Ten Rings.

Wenwu trounces the enemy army and breaks open their fortress using the power of the Ten Rings.