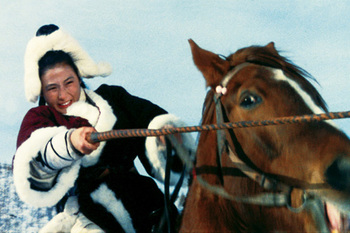 Yun (Cheng Pei-pei) giving some mooks A Taste of the Lash.
Advertisement:

Set in the Chinese-Mongolian border during ancient periods, a treasure vault is raided and the Yun family, tasked with protecting its contents, is massacred. But the Yun family's young daughter, Yang Kai-Yun / Miss Yun survives the bloodbath. Eighteen years later, Yun (Cheng Pei-pei) grows up seeking to avenge her family, and she is assisted by Wang Jian-xin, a swordsman who had reasons of his own for helping her.

Unusually for a Wuxia movie starring Cheng Pei-pei "The Queen of Swords", in this movie she uses a whip as her default weapon instead.