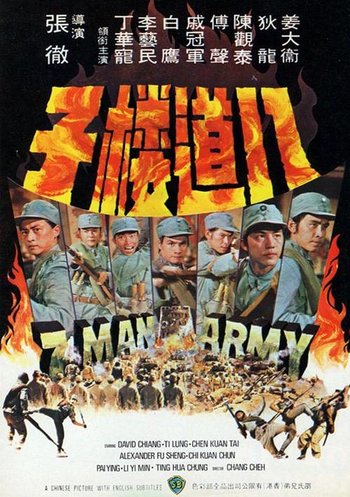 Very Loosely Based on a True Story, the film is a dramatic adaptation of the Defense of the Great Wall

, a battle of the Sino-Japanese conflict at the start of World War II, where a key section of the Great Wall is recaptured by the Chinese forces from the Japanese invaders, but at the cost of all but seven members of the PRC army. When Japanese reinforcements, whose ranks includes Mongolian mercenaries as well as tanks and artillery, are on their way to recapture the fort, the seven Chinese defenders will put up one last defense until reinforcements can arrive.

Most of the key players of Shaw Brothers are cast as the seven, including Ti Lung as Battalion Commander Wu Chan Zheng, David Chiang as Private First Class Bai Zhang-xing, Alexander Fu Sheng as Private He Hong-fa, Chen Kuan-tai (The Boxer From Shantung) as Private Jiang Ming Kun, Li Yi-min as Private Pan Bing Lin, Chi Kuan-chun as Private Chu Tiancheng and Pai Ying as Private First Class Jia Fu-sheng. Originally members of different platoons who doesn't know each other, being thrush into the same situation as the lone survivors of the PRC army against the invading Japanese, the seven of them will have to bond as brothers to survive.