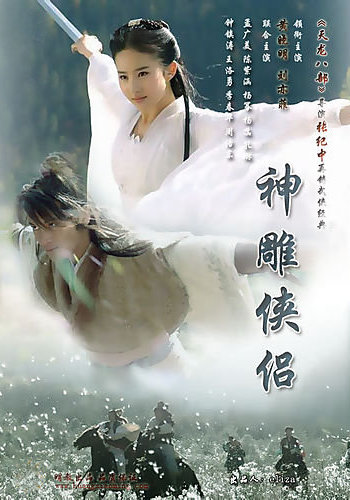 "'Wu' means martial arts, which signifies action, 'Xia' conveys chivalry. Wuxia. Say it gently... 'whooshah'... and it's like a breath of serenity embracing you. Say it with force, 'WuSHA!', and you can feel its power."
— Samuel L. Jackson, "The Art of Action: Martial Arts in the Movies"

in Mandarin) stories are tall tales of honourable warriors (侠 xiá) fighting against evil, whether it be an individual villain, or a corrupt government. Notable for melodrama, spectacular swordplay, and high-flying martial arts where the laws of physics, like gravity, seem like negotiable concepts.

Although some wuxia stories are set in modern times, or even the future, most take place in the "Martial Arts World" of Jiānghú (江湖 — literally "rivers and lakes") a Fantasy Counterpart Culture of Imperial China. The Jianghu is a "shared universe", populated by martial-artists and monks, wandering knights and beautiful princesses, thieves and beggars, priests and healers, merchants and craftsmen. The best wuxia writers draw a vivid picture of the intricate relationships of honour, loyalty, love and hate between individuals and between communities in this milieu. It is implicit that law and government are unjust, ineffective and/or corrupt, requiring the xia to settle differences by force moderated only by their chivalrous code, and often forcing them to live as outlaws despite their noble characters. In modern Chinese, perhaps as a result of these connotations of a separate world with its own rules, the term jianghu has taken on other meanings, including the underworld or criminal gangs.

A more romantic term known as Wulin (武林 — literally "Warrior's Forests") is used when one wants to talk specifically about the world of martial artists and warriors, divorced from the ugly connotations of criminality that jianghu has come to embody. Wulin is basically a majestic way of saying "The World of Warriors."

In recent years, a sub-genre known as Xianxia ("Immortal Hero") has developed. Essentially a High Fantasy version, it usually features a Taoist or Buddhist protagonist mixing in Full-Contact Magic with his martial arts, and fantastic elements being overt rather than subtle and in the background. It is an emerging genre whose precise boundaries are in flux, with a number of popular Web Serial Novels having brought it to prominence.

Compare Sword & Sorcery, High Fantasy, Heroic Fantasy, and Swashbuckler. The Japanese equivalent is Jidaigeki, particularly the chanbara subgenre. (Interestingly, the term Wuxia was originally a calque of the Japanese Bukyo. In Japan, however, the term bukyo has since faded into obscurity). The closest American equivalent is The Western, especially regarding its hazy boundary with Weird West. For the 2011 movie titled Wu Xia, see Swordsmen.