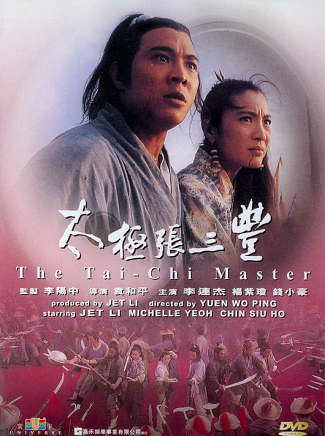 Tai Chi Master (also known as Twin Warriors) is a 1993 martial arts films starring Jet Li and Michelle Yeoh. It tells the story of two childhood friends, the nice if somewhat slow Junbao (Li) and the more hot-tempered Tienbo, who grew up in a Shaolin Temple. They would often get in trouble either because of Tienbo's temper or for being bullied by other students. Only one Master in particular liked them, though he pretended not to.

Eventually, as adults, both are thrown out of the temple after Tienbo nearly kills another student who cheated during a fight.(This despite proving themselves incredibly formidable against an army of monks.) Their old teacher gives them as a parting gift a kind of wooden scroll that they are not supposed to read until they find themselves at a crossroad in their lives.

The two of them try to earn a living at a small town but end up involving themselves in other people's problems; first they help a female warrior called Miss Li when she tries to protect a man being harassed with unfair taxes by the army. Later they save another woman, Siu Lin (Yeoh) when she comes looking for her missing husband and finds him married to the governor's niece. Hilarity (and lots of fights) ensue.

Tienbo, fascinated by the power of the army, joins it, but Junbao refuses, so they finally go their separate ways. Tienbo soon rises up the ranks, while Junbao works at a pub and becomes close to Siu. It turns out however that the pub is the headquarters of the rebellion against the corrupt government, so the two friends are now on opposite sides.