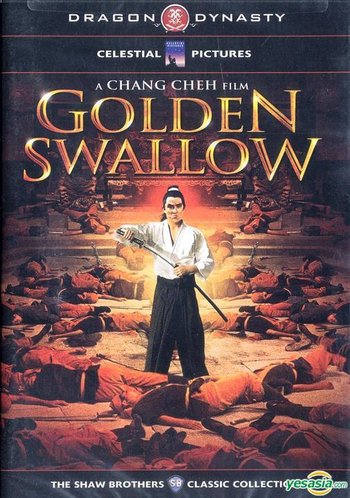 I love it when DVD tells you right on the cover what you'll expect to see in the film itself!
Advertisement:

Golden Swallow is a 1968 Wuxia Martial Arts Movie released by Shaw Brothers, sequel to Come Drink With Me, but this time the titular heroine (played by Cheng Pei-Pei) takes a backseat to a whole new character: Jimmy Wang Yu's Silver Roc, a mysterious swordsman and killing machine on a rampage across the clans of ancient China.

Jimmy Wang-yu, then 25 years old and fresh off the recent success of One-Armed Swordsman, is seen as potential star material by Shaw Brothers, and as such takes over the spotlight. His portrayal of Silver Roc (combined with his previous film, the martial arts classic The One Armed Swordsman) would establish him as an icon in wuxia cinema, with various similar historical period film roles coming his way. Here, his presence is electrifying, chilling, and domineering, with few words spoken, simply through his stoic persona, makes him a fan-favourite.

Following the events of Come Drink With Me, the swordswoman Golden Swallow discovers someone from her past is back, someone whom she assumed was dead long ago, and is making a name of himself - and her - because of the scores and scores of dead bodies he leaves behind everywhere he goes. Her former protégé, Silver Roc, is bent on reuniting with her, just as Golden Swallow is engaged in a relationship with Iron Whip (Lo Lieh). And when Silver Roc's enemies catches up with him, making Golden Swallow and Iron Whip the target of assassins as well, the trio will have to team up and fight.

… or, to be more precise, Golden Swallow and Iron Whip takes a backseat, and fight whatever morsels of leftover mooks Silver Roc forgot to kill during his massacres.