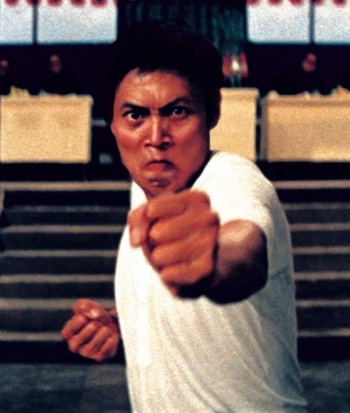 A screenshot from Five Fingers of Death, in which Lo Lieh is about to send someone flying to Pluto.
Advertisement:

Born in an Indonesian-Chinese farming family, Lo Lieh was sent back to Hong Kong at a young age to attend school by his parents who preferred their son to "remember his true heritage". He joined Shaw Brothers at an early age, being one of the academy's first students and considered among their best, where the studios would cast him in various roles, both as villains and heroes.

His performance in Five Fingers of Death (1973) is widely considered his breakthrough role; the movie was released months before Fist of Fury, and with the other Bruce Lee film it's considered one of the two movies that kick-started the martial arts craze in America back in the 70s. Due to the amount of movies he starred in at his peak of popularity note  In the 1970s he made an average of 7 movies a year , Lo Lieh's daily salary back then in the late 70s is reportedly as high as 18,000 HKD (2,322 USD).

Lo Lieh remains as prolific in the 90s as he was in the past, playing gangsters and mob bosses in Heroic Bloodshed films which were at its craze, before his eventual retirement at the end of the decade. He also shifted his work to television, being a regular at shows from Asia Television Limited (ATV). He later died of a heart attack in 2002, a year after he announced his intention to permanently retire from acting, leaving behind two sons (both from his second wife, an elder sister of director Stanley Tong (Tang Ji Li)).

Speaking of wives, Lo had a lurid personal life. He was married four times, and Le Yun (乐韵), a mistress of his (also known as Le Hui (乐慧)), committed suicide in 1995 at the age of 28.