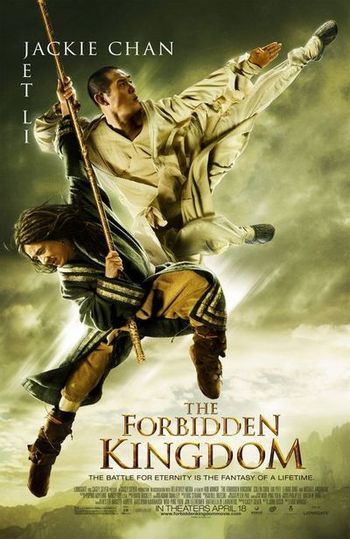 About two-thirds of a kung-fu action fantasy film set in ancient China with Jet Li and Jackie Chan and loosely based on Journey to the West.

The rest of the film is about a modern-day American teenager who finds himself in ancient China after discovering the Monkey King's magical staff. He accompanies Jackie Chan and Jet Li on their quest to return the staff to its rightful owner while trying to avoid the minions of the evil Jade Warlord.

The writer and the director claim that they considered a story with a Chinese-American teenager being the protagonist in a "get in touch with his roots" story, but Jackie Chan thought it would be better for the main character be a white kid. That way, the outsider, who was obsessed with kung fu movies but did not understand the meaning and philosophy behind kung fu as a martial art, would gain a deeper appreciation for lessons he learned along the way.

Did we mention Jackie Chan vs. Jet Li!!!