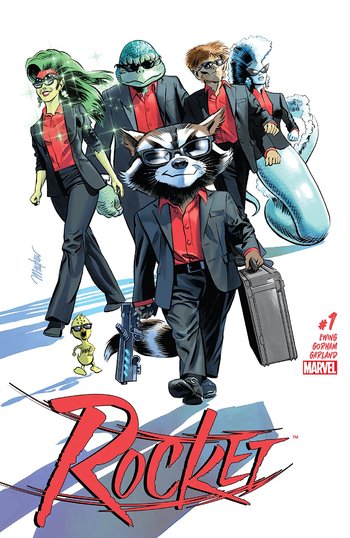 Rocket is a Guardians of the Galaxy spin-off, published by Marvel Comics. It is written by Al Ewing and drawn by Adam Gorhan.

Rocket Raccoon is a racoon with a problem. An old friend has come to him to with a job. She needs someone to break into a high-tech vault and recover some land deeds from her homeworld, to protect them from the evil Beavertron corporation, and Rocket's the best man... er, racoon for the job. Of course, a job like this would require more than just a devastatingly cunning and fuzzy racoon, it'll need a crew. But in such a crazy cosmos of oddball bounty hunters, space otters and raccoons, nothing can be trusted for long.