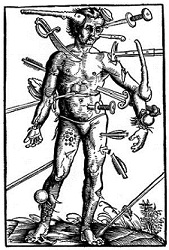 When characters, particularly tough guys and girls, get large amounts of projectiles or weapons stuck in their body. They continue on fighting with the blades and shafts eerily poking out of them at odd angles. Essentially, these become a new fashion accessory that testify to their exceptional prowess and stamina, and they do very little to actually slow down the lumbering war machine. In fact, the character in question may actually enjoy this situation. To take this even further, the impaled characters can pull the weapons out of their bodies and use them to fight back.

Alternatively, this trope can also be invoked through a character's particularly gruesome death, where the victim is pierced in a similar manner but does not quite fare as well as their seemingly-invincible counterpart. In this case, the odds and ends stuck in the victim's body underscore the brutal fate, along with adding unintentional Nausea Fuel for those with weak stomachs.

Either way, having a character with multiple objects sticking out of them adds a touch of dramatic tension, while highlighting that character's badass qualities, even if they die. Note, however, that for this trope to have been truly invoked, the work must feature a character with a sufficient amount of projectiles/weapons stuck in their body, typically at least 4 or 5. Otherwise, the atmosphere created isn't quite the same.

Compare Impaled with Extreme Prejudice for characters being viciously impaled by various implements, Annoying Arrows for projectiles being treated untruthfully in fiction, Only a Flesh Wound for wounds that do little to slow an attacker down, and Death by a Thousand Cuts for deaths involving a long repetition of small cuts or hits.

Dante is ambushed by a group of Hell Prides. Unfortunately for them, Dante is used to this sort of thing.

Dante is ambushed by a group of Hell Prides. Unfortunately for them, Dante is used to this sort of thing.