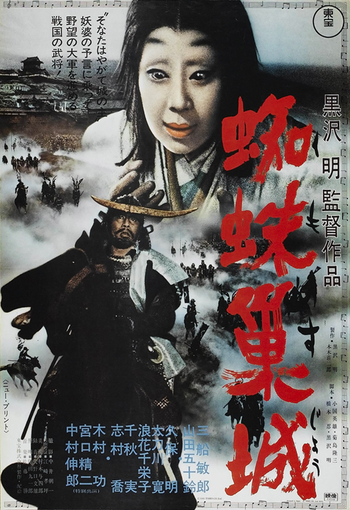 If you choose the path of bloodshed, then climb to the pinnacle of evil!
If you choose to build a mountain of corpses, build its summit as high as you dare!
If you will make blood flow, let it be a river – no, an ocean of blood!
— The Forest Spirit, to Washizu
Advertisement:

Throne of Blood (蜘蛛巣城, Kumonosu-Jō, lit. 'Spider's Web Castle'), is a 1957 film by Akira Kurosawa, and is Kurosawa's version of Macbeth. It stars Toshiro Mifune as Washizu, a Japanese warlord who meets a strange spirit who gives him some dark ideas about taking the place of his lord. Kurosawa fuses William Shakespeare's plot with elements from Noh theater, and sets the story at an unspecified time and place in Sengoku-era Japan. The Macduff subplot is left out, leading to a different, but more thematic end for the Macbeth figure.

In 2010, the film was adapted as a play for the Oregon Shakespeare Festival, effectively bringing things full circle by nature of its roots.

Kurosawa would release two more films based on Shakespeare's tragedies: The Bad Sleep Well, a much looser adaptation of Hamlet, and Ran, which transplants King Lear to Sengoku Japan just as Throne of Blood did for Macbeth.

Throne of Blood includes examples of: