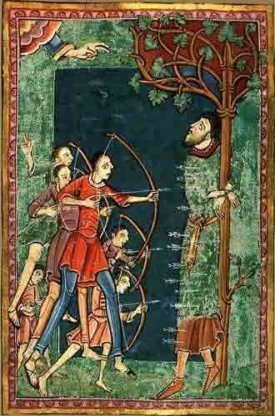 St. Edmund "the Martyr" was king of East Anglia when it was conquered by pagan Danes in 869 AD, an event which meant the end for the independent Anglo-Saxon kingdom of East Anglia. The king did not survive the invasion. The history books say nothing about the way he died, except that the Danes killed him in or after a lost battle. The story that entered the public consciousness, however, comes from Passio Sancti Eadmundi ("The Martyrdom of St. Edmund"), a hagiographic account written more than hundred years after Edmund's death. This tradition holds that the king was captured alive by the victors, who, on the orders of their leader, a certain Ingwar, tortured him by tying him to a tree, flogged him, riddled him with arrows, and finally beheaded him.

Whatever the truth, the notion that Edmund had died as a martyr of Christianity, and thus was to be looked on as a saint, arose soon after his demise. By the early 10th century his remains were moved from their first place of burial to a more stately shrine at Bury St. Edmunds in Suffolk, which became one of England's most popular places of pilgrimage. There is no proof that the "riddled with arrows" tale existed before the 980s, when The Martyrdom of St. Edmund was written.

As a saint, Edmund's patronages include kings and pandemic diseases; his feast day (supposedly the date of his martyrdom) is November the 20th.

St. Edmund was one of the most popular saints of medieval England, especially during the Anglo-Saxon period; this may have to do with the fact that the saintly king who had died fighting the Danes (and conveniently left no heir) nicely complemented the other national hero, King Alfred of Wessex, whose struggle against the Vikings served to legitimize the claim of the Wessex kings to be kings of all England.

The fact that he died in 869 is almost the only thing that is known about Edmund from a historical perspective. The disparity of Edmund's saintly reputation and the scarcity of historical records about him acted as a powerful incentive for hagiographic writers to flesh out his legend. Various expansions made over the centuries concern Edmund's saintly virtues, his fame as a warrior, his life before the Danish invasion, and the backstory of the wicked Danes and their fateful invasion of England. The principal hagiographical texts about Saint Edmund are: