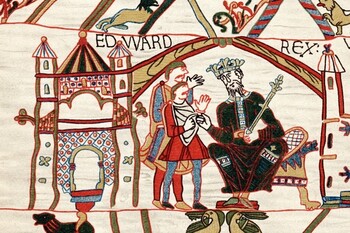 Anglo-Saxon king of England Edward the Confessor on a segment of The Bayeux Tapestry.
Chapter 1: Anglo-Saxon (or, "Whatever happened to the Jutes?")
— The History of English in 10 Minutes

In the fifth century, after the evacuation of Roman troops during The Migration Period, the Anglo-Saxons came to Britain. These were a cluster of Germanic tribes, notably the Angles (from what is now Schleswig-Holstein in Germany and Syddanmark in Denmark, in a peninsula that is still called Angeln in German and Angel in Danish), the Saxons (mostly from what is now Lower Saxony in modern Germany), and the Jutes (from the Jutland Peninsula in modern Denmark), who all shared a culture vaguely resembling that of the Vikings.

They settled down and after a while converted to Christianity. They struggled among themselves for supremacy, forming what is called (for the sake of neat organization and poetic phrasing) the seven kingdoms (sometimes the "Heptarchy") of the Saxons: East Anglia, Essex, Kent, Sussex, Wessex, Mercia, and Northumbria.note Although even this is a quite significant simplification, as there were at times more than just seven kingdoms; The Hwicce — who occupied much of modern Gloucestershire, Worcestershire and Warwickshire before being dominated by the Mercians — are often overlooked, Northumbria was once three separate kingdoms (Deira, Bernicia and Lindsey), while the Isle of Wight was once an independent Jutish kingdom before being absorbed by Wessex. These kingdoms vied for supremacy until the arrival of the Danes made their quarrels seem petty.

The Danes settled in Britain and in a few generations, conquered almost the northeastern part of the Anglo-Saxon lands. However, The House of Wessex had a recovery under Alfred the Great and his descendants which continued until they had reconquered all the Danish-occupied lands (now called the Danelaw). This made the House of Wessex ruler over all the Angles' lands, hence the term "England". The Wessex house lost its grip and was overthrown by Norse invaders under Cnut the Great, the King of Denmark and Norway; although the House of Wessex got the throne back after Cnut's sons Harald Harefoot and Harthacanute died without surviving legitimate issuenote That we know of; Harald may have had a son by the (very English) name Ælfwine, but we think he was probably illegitimate., England nevertheless became a combined Saxon-Scandinavian nation, which was an easy fit once the wars had been forgotten because they had very similar cultures. After Harthacanute's successor Edward the Confessor also died without issue, Harold Godwinson, of the powerful Godwin family, claimed the throne by agreement of the Witenagamot (see below), but he was overthrown by the Duke of Normandy, William the Conqueror. This is considered the end of Anglo-Saxon England and the beginning of Norman England, and the shift of the main external influence on England from the Nordic countries to France.

The Anglo-Saxons are noted for their poetry and their art. Examples of Anglo Saxon art are illuminated scriptures such as those made at Lindisfarne Abbey (many of whom were lost when it was sacked), and the royal hoard from the Sutton Hoo burial ship. References to Saxon poetry are found on TV Tropes as well.

Their law system has also been admired. Much of it was based on webs of oaths and patronage and even hostage-exchange between nobles; somewhere between a clannish system and a feudal one. However they are also considered to be in some ways the founders of English Parliamentary government because of their system of Moots (councils) that led from the small village moot to the Witanagemot (Council of Wise Men) — Witan for short — which advised the King.

The resemblance of this system to a modern democracy has been exaggerated in the past. While it wasn't a democracy, neither was it an absolute rule, and the King was wise to listen to the Witan. Moreover, the Witan had a considerable say in the succession to the crown, even though the previous king's influence may have been strongest. The Anglo-Saxons also instituted a number of other elements of English government, including the office of sheriff. "Sheriff," by the way, comes from "shire reeve," "reeve" being like a magistrate and "shire" like a county.

The term "Angle" by the way, is said to mean "fishhook", although it could also mean "narrows" or "tight bay" (the Angles were from Angeln, a part of eastern Schleswig bounded on the south by the Schlei inlet and bounded on the north by the "Firth of Flensburg"—both narrows of the Baltic Sea). Saxon comes from seax, a blade much in vogue among them for both war and for peaceful purposes to the point it was a standard part of dress - though it appears the word was only just not as vague as "blade" itself, with examples of a seax ranging from that of a long dagger to being longer and broader to the point of approaching a machete.

Notable Anglo-Saxons Alfred the Great, Æthelflæd and St. Edmund of East Anglia have their own pages; See The House of Wessex for notes on the whole dynasty. See Beowulf, The Battle of Maldon and Dream of the Rood for examples of Anglo-Saxon poetry.

The Anglo-Saxons were the founders of England, and contributed massively to its distinctive culture, perhaps most notably through the English language, which is descended from the varying dialects that were spoken by the Angles, Saxons, and Jutes after they moved to Britain (along with healthy doses of Norse and French). They also set up the shire boundaries that remained in use until the 1990s, while lots of English towns and cities originated as Anglo-Saxon settlements. And many people in England today can trace large amounts of their genetic ancestry

to the Anglo-Saxon settlers

, particularly in the south and east of the country. It's worth mentioning however that Anglo-Saxons didn't outright replace the native Britonnic populations as it is generally believed: genetic studies demonstrate that modern English people are, by large, descendant of those Britonnic populations, implying that they were instead slowly assimilated by the Anglo-Saxon invaders rather than exterminated/driven away.

Related to White Anglo-Saxon Protestant only in the sense that a number of these were descended from Anglo-Saxons and that Anglo-Saxons were what we would consider white today. They were of course not Protestants, since Martin Luther was not born yet.