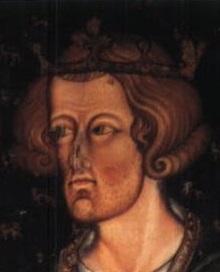 Edwardus Primus. Scottorum Malleus hic est
Latin inscription on Edward's tomb which means "This is Edward the First, Hammer of the Scots".
Advertisement:

Edward I (17/18 June 1239 – 7 July 1307), also known as Edward Longshanks (notably, he stood 6'2'' (1.88 meters) tall, pretty impressive for his time) and the Hammer of the Scots was king of England and son of Henry III. He was named after England's royal saint, Edward the Confessor, who was then thought to be The Paragon of kingly perfection. It helped that Henry III wanted to emphasize his Englishness, which naming his son after one of the most beloved pre-Norman kings could sharpen.

Edward I has been immortalised as the bad guy from Braveheart (though that version is blatantly a significant Historical Villain Upgrade).

Edward married Eleanor of Castile when they were both young. They had a good marriage and were rarely parted; Eleanor even accompanied Edward on crusade.

He first came into prominence during the Baron Wars when radical elements of Parliament led by Simon de Montfort, Earl of Leicester, tried to wrest power away from King Henry. The King was imprisoned, but Prince Edward escaped and rallied royalist forces and defeated de Montfort.

After becoming King, Edward decided to settle old scores by conquering Wales—the Welsh had sided with the barons, and Llywelyn ab Gruffudd (the "Prince of Wales", at the time an actual leader) married de Montfort's daughter Eleanor, though he had done so at the time with Edward's full sanction. Edward incorporated Wales into his kingdom and named his infant son Edward of Caernarfon (who was actually born in Wales; Carenarfon is the site of one of Edward's major castles built to control the country) Prince of Wales, in order to keep to the terms of the agreement that his candidate would be Welsh-born and non-English-speaking.note Or so popular folklore goes; in reality, Edward I himself didn't speak English as a first language, as the language of the English high aristocracy and royalty at that time was French. That said, Edward almost certainly did speak English, at least a little; by his reign, most of the nobility spoke English as a first language (there were even French textbooks written for English-speaking nobles to learn the tongue of court, and some nobles sent their kids to Paris to improve their French), so he would've needed English to talk to all but his most highborn courtiers. The firstborn sons of English kings had been named Prince of Wales ever since.

Then Scotland thought it a good idea to have Edward judge who would be their next king. He gave his support to John Baliol who in turn acknowledged Edward's overlordship. But when war with France coincided with a Welsh rebellion, he exercised his overlordship and summoned the Scottish nobles to fight for him but they refused and sided with France. Edward would spend the rest of his life fighting Scotland. As a King, Longshanks was also responsible for persecuting and censuring Jews and finally passing the 1290 Edict of Expulsion that would eventually be revoked by Oliver Cromwell during the English Civil War. Despite these less-than-pleasant actions, English historians of the 19th and 20th Centuries nontheless feel that Edward I was very important in developing and nurturing English institutions, encoding several important laws and legal reforms that made him a highly important medieval monarch.

In 1290, his wife Eleanor died and he ordered the famous Eleanor Crosses to be erected in several locations in her memory. Though the couple had many children, only one male child survived. Edward then remarried to Margaret of France, sister of the French King Philip IV. With Margaret, he had three more children, two of whom survived to adulthood. She mediated between her husband and her stepson at points near the end of his reign.

Edward I in fiction: