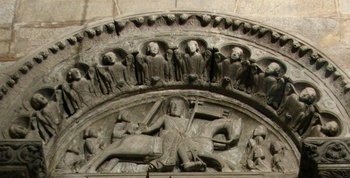 Tympanum of the Battle of Clavijo in the Santiago da Compostela Cathedral, depicting Saint James mounted on a horse surrounded by the 100 maidens
"Ay, this is a knight, and of the squadrons of Christ! This one is called Don Saint James the Moorslayer, one of the bravest saints and knights the world ever had or heaven has now."
—Don Quixote
Advertisement:

The Battle of Clavijo was a epic clash, believed for many centuries to have been historical fact, between the Christian Kingdom of Asturias and the Islamic Emirate of Cordoba where one of the Twelve Apostles of Jesus Christ, James the Greater, descended from Heaven to assist the Christians in battle against their enemies and earn a decisive victory. Saint James (or as he is referred to in Spain, "Santiago") is revered as the patron of Spain and many countries it has colonized such as Guatemala, Nicaragua, and some parts of Mexico (where Our Lady of Guadalupe is the national patron) and the Philippines (where Lorenzo Ruiz is national patron). According to Christian tradition, he traveled west to evangelize the Iberian Penisula and after his return to Jerusalem, he became the first Apostle to be martyred when King Herod ordered his beheading. The Spaniards say his remains where later ferried to Northern Spain where they built his Cathedral of Compostela, though the Armenians claim his head is preserved inside their Apostolic Church in the Armenian Quarter of Jerusalem.

The supposed date when this event took place was 23 May 844, though the first mention of it was 300 years later by Pedro Marcio, who claimed to have copied another document from the 9th Century in which King Ramiro I makes a series of donations to Compostela as a thanksgiving after the battle. The legend goes that in 783, the Asturian bastard Mauregatus usurped the throne of his brother with the help of Cordoban emir Abdul Rahman I in exchange for annually paying him a tribute of 100 virgin maidens — 50 noblewomen and 50 common-born. Mauregatus agreed to this, much to the Christian nobles' disgust; they revolted and killed him in 788 (though sources claim Mauregatus died of natural causes). His successor Bermudo negotiated instead to pay money to the Moors to keep his head from rolling next, but they kept demanding the 100 tribute be reinstated, until Ramiro I ascended the throne. He denied them any sort of tribute and prepared to fight against the Emirate, which was much greater and dominant over the Asturians. In the night before the battle, James appeared to Ramiro in his dreams telling him that God chose him to be the patron of the Hispanic peoples and that he needed to invoke him when the time came. The Apostle appeared on the killing fields of Clavijo to lead the Christian host into victory. The devastating victory ensured that their enemies never demanded such tribute again and in gratitude, Ramiro established the Vote of Santiago and created a military order named after the saint whose purpose was to protect the pilgrims from invaders.

While the historical consensus is that the battle never happened, there is some grain of truth as it was inspired by some other factual and historical events that came after which helped build the myth. It's true that Ramiro also spent a lot of time fighting the Moors himself and while the region of Clavijo was the focus of several battles between Christians and Muslims, neither Spanish or Arab historians ever mention this specific battle. It's generally agreed that the Battle of Monte Laturce

was the most likely inspiration, setting up Ramiro's son Ordoño against tribal lord Musa ibn Musa ibn Qasi. Nobody really knows it's exact date and it's basically a footnote in the long struggle, but it was confirmed to have happened and that it was a Christian victory that helped build this story. While the "tribute of 100 virgins" is most definitely fabrication (as no such specific demand were being imposed on the Spaniards, especially by Abdul Rahman I), there were cases of Spanish ladies

being carried off to harems as right of conquest and that the Córdoban emir that ruled during the battle of Clavijo, Abdul Rahman II, wasn't very well-liked: he had a philandering reputation and his reign was marked by a brutal persecution of Christians

which served well into constructing this tale.

The Battle of Clavijo provided one of the strongest and enduring symbols of Spanish nationalism, specially during the Reconquista with Santiago becoming the Spaniards' war cry not only against the Moors, but also by Hernán Cortés' conquistadors during the colonization. Miguel de Cervantes of Don Quixote fame also admired Saint James and referenced him in his magnum opus. To this day, Spanish soldiers have used Santiago's cross as badges, specially when deployed during The War on Terror.