Literature / The Voyage of St. Brendan 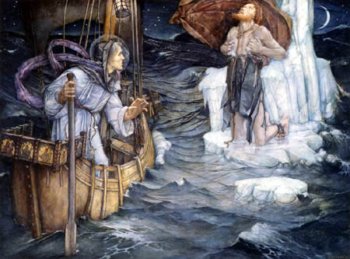 The Voyage of St. Brendan is a medieval Irish legend. Its protagonist, St. Brendan of Clonfert, was a historical Irish abbot and missionary who possibly lived from 484 to 577 AD, but the account of his legendary voyage (in Latin, Navigatio Sancti Brendani Abbati) was written no earlier than c. 900 AD, presumably by an Irish monk.

An old monk called Barinthus visits the monastery of Ardfert-Brendan and tells abbot Brendan and the monks about his stay in the Terra Repromissionis Sanctorum, the Land of Promise of the Saints, just a short sailing distance west of Ireland.

The Land of Promise, Barinthus relates, is a large island in the Western Sea which God had intended for mankind to inhabit, before mankind botched it with their sinfulness. In the Land of Promise it is always day, all plants are continually blooming and bearing fruits at the same time, all stones are gems, and the air is so refreshing that visitors need neither food, drink, or sleep. It is now uninhabited, but God will give it to the Saints at the end of times.

Brendan decides that he, too, would like to see this miraculous land. He selects a crew of monks and, after fasting together for 40 days, they set out to the coast to construct a ship. But at the last moment, three sinful monks who have not properly purified themselves turn up and beg Brendan to let them join. Against better knowledge, Brendan takes them along. But sinners cannot enter the Land of Promise, and the trip which was planned to take a few days turns into a seven years odyssey.

The Voyage of St. Brendan enjoyed popularity all over Europe and was eventually translated or adapted into numerous European vernacular languages. In the process, the legend branched out into several variants which modify or expand the original tale: In many vernacular versions an angel commands Brendan to undertake the voyage because Brendan does not believe in the existence of the Land of Promise and has burned a book telling about it. There may also be additional adventures of the voyagers which do not appear in the earlier manuscripts, and the number of Brendan's shipmates can vary from as few as 12 to as many as 150.

St. Brendan's voyage was widely taken for based on facts, and "St. Brendan's Island" frequently appears on maps from between the 14th and 18th century as an island in the Atlantic, somewhere west of Europe or North Africa. However, in reality the tale is an example of an Irish imram or 'sea-voyage', i.e. a romance based in mythology, and the "Land of Promise" is actually a Christian re-interpretation of the Celtic Otherworld.

and in English translation (pdf file).

Compare The Voyage of Máel Dúin.