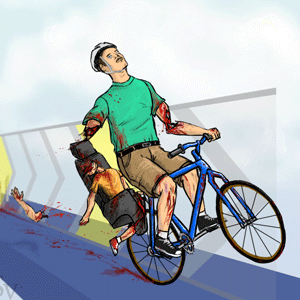 Note the child sitting in the back.
"Little boy, you okay- OHHH... Oh my... he's not okay, he lost his head. Oh God, what the fuck is wrong with this GAME?"
— UberHaxorNova, in his first session

A Flash browser game created in 2010 by Jim Bonacci that is like many other racing/driving browser games, except all the characters are Made of Plasticine and ride in vehicles with little to no protection aside from maybe a helmet.

See also Guts And Glory that originally developed as fan game and plays like a 3D Happy Wheels.