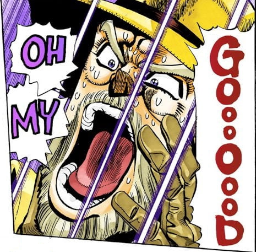 Even Joseph Joestar is afraid!
"They're eating her! Then they're going to eat me! OH MY GOOOOOOOOOOOOOOOOD!!!"
— Arnold, Troll 2
Advertisement:

Sometimes, an astonished someone just has to scream: "OH MY GOD!!!" In media intended for children, the mild oath can sometimes serve as a Precision F-Strike.

Anime that use this as Gratuitous English are always strange because they enunciate it like a Valley Girl — but they obviously intended the less... silly version. It's routinely abbreviated as OMG when typing, and sometimes the Valley Girl will literally say the letters, "OMG!"

Note that the Big "OMG!" in more intimate situations has its own trope.

Rarely does their god answer, no matter how loud they shout. Someone in the room with delusions of divinity might, though.

Arnold's laughable scream after discovering he's about to get eaten.

Arnold's laughable scream after discovering he's about to get eaten.