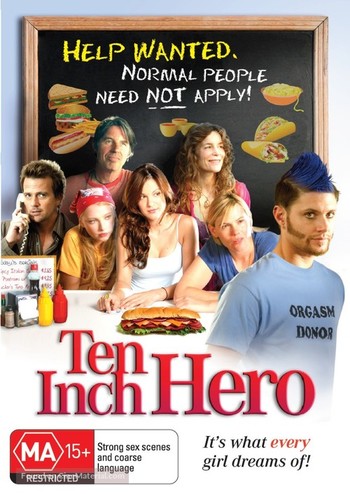 Ten-Inch Hero is a 2007 independent romantic comedy surrounding the quirky Elisabeth Harnois, Danneel Ackles, Jensen Ackles, Clea DuVall, and others. Piper, a young 20 something, arrives in Santa Cruz, looking for the baby she gave up for adoption when she was a teenager. While she searches, she works at a sandwich shop with its own set of colorful workers. There's the eccentric Priestly, whose personality reflects in his loud clothing and even louder hair. His coworkers are the contrasting shy Jen, who has a secret online romance, and sex-loving Tish. Rounding them out is the chill, laid-back shop owner Trucker. As the film progresses, the issues the main cast have involving unrequited love and making the right decisions are put to the test.