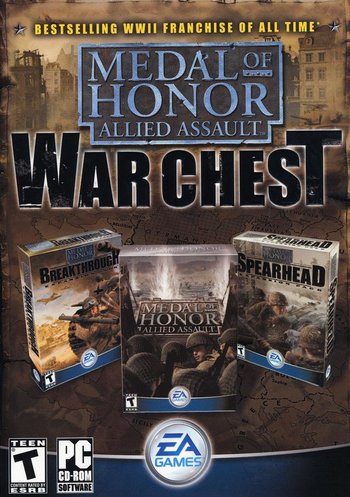 Battle your way through enemy-infested towns, regain control of the Atlantic.
"You have been assigned to a mission few would qualify for. A mission few would survive. At the turning point of World War II, across a 50-mile stretch of France's Normandy coast, the Allies staged a massive assault against Hitler's vaunted Atlantic wall. Valor...Duty...Leadership...Sacrifice...Can one man truly make a difference?"
— Opening Narration during the Intro

Medal of Honor: Allied Assault is the 3rd entry in the Medal of Honor series, developed by 2015, Inc. and released January 22, 2002 for Microsoft Windows. In this game, characters are introduced to a new protagonist, one Lt. Mike Powell, a US Army Ranger who's later made a part-time OSS agent following a nearly-botched mission during Operation Torch.

Two expansion packs for this game were later released in 2003.

Of special note to this game was that some of the people behind this title would later go on to establish Infinity Ward, and create the first Call of Duty game.

Allied Assault and its expansions contain examples of: