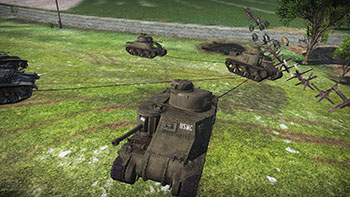 In media, what can possibly be better then the heroes having a Tank show up to help them out? How about the villains showing their savvyness, and throwing their OWN tanks into the fight? Since World War II, tank on tank fights have been glorified in media, although not always for the correct reasons. Tanks today are just simply put, the modern day equivalent to knights on horseback, and the epic struggles of their crews are the subject of many stories of heroism.

Regardless of whether or not it's a battle between Real Life tanks, as long as both sides break out the heavy armor to counter one another, it counts. After all, this is basically a case of when both sides utilize Tank Goodness.