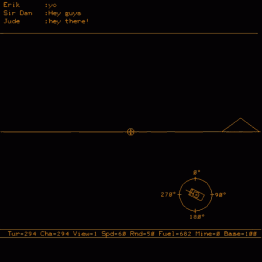 Panther was a 3D multiplayer First-Person Shooter tank game for the PLATO Network, created in 1975 by John Edo Haefeli and Nelson Bridwell. It's an ancestor of Atari's Battlezone.

Players choose one of two teams, Squares and Triangles. Each team member starts near their team's base and sets out to destroy the enemy base. Players message each other to coordinate their actions. Each player has an onboard view like Battlezone, and a map view that shows their team, five mountains, and enemy tanks if they are in range.

The game was very advanced for its time, with dynamically generated terrain, hidden line removal, and Ragdoll Physics on the shells. A version with improved graphics called Panzer was developed in 1977 with assistance from the US Army. Atari, which had a PLATO account, created their own version, Battlezone, in 1980.