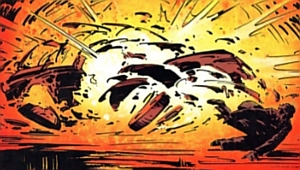 IGNITION!
Homer: Bart, would you go start daddy's car?
Marge: Homer!
Homer: What? There's nothing to worry about.
Bart: Well then you start it!
Homer: Alright, fine! I'll take a cab!
— The Simpsons, "Mayored to the Mob"
Advertisement:

A favourite assassination method of terrorists, spies, and mobsters alike is to hook up a bomb to the ignition switch of a car, so that it will lie dormant until some poor soul starts it.

While the intended target is, naturally, the car's owner, this trope is the number one killer of chauffeurs and valets — which occasionally raises the Fridge Logic of why you would put an ignition-triggered explosive in a chauffeured car in the first place — and has claimed its fair share of helpful Dead Sidekicks and Disposable Women as well.

There is an interesting case of The Law of Conservation of Detail attached to this trope. In normal circumstances, little to no screentime is devoted to a character walking to their car or starting it. Hence, whenever this does happen — especially if you see a close-up of the key — the viewer probably has a distinctly uneasy feeling in his stomach. Wait for it... three... two... one... ignition! Another dead giveaway is if the car is a gift from someone the recipient really shouldn't trust.

Variations include remote-detonation and bombs hooked up to other parts of the car, but the idea is to kill the occupant. Vehicles turned into Molotov Trucks don't count.

A subtrope of Vehicular Sabotage. See Every Car Is a Pinto for cars blowing up that have no reason to. Can be combined with Suicide Attack if the car-bomber chooses to drive the vehicle themselves and stay inside when it detonates.

Unrelated to steam engines and Stirling engines, which really do work by "external combustion".

In the rebooted Robocop universe, Alex Murphy meets his temporary end, due to a car bomb.

In the rebooted Robocop universe, Alex Murphy meets his temporary end, due to a car bomb.