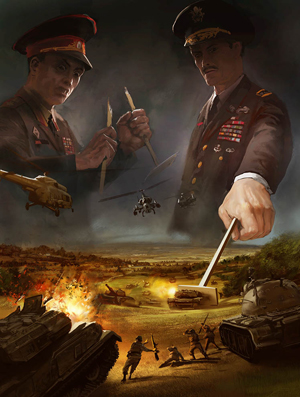 The last guy he played with ragequit.
Advertisement:

Wargame: European Escalation is a Real-Time Tactics game revolving around NATO vs Warsaw Pact countries in a Cold War Gone Hot. Made by Eugen Systems and published by Focus Home Interactive. This game features a lot of real life Cold War-era vehicles and weapons. Players gain stars through gameplay which they can use to upgrade/buy units into their "deck" to use in multiplayer, resulting in a wide variety of army composition and tactics, from mechanized infantry forces, heavy tank battalions, artillery-based groups to airborne-centric armies.

A sequel, Wargame: AirLand Battle, is set in the Scandinavian theater, and in addition to aircraft it introduces Canadian, Danish, Swedish and Norwegian forces.

A Spiritual Successor, WARNO (military slang for "warning order"), is scheduled to be released in 2022. Based on an Alternate History scenario where the two blocs go to war after Gorbachev was overthrown, WARNO is set in both Germanies in 1989.