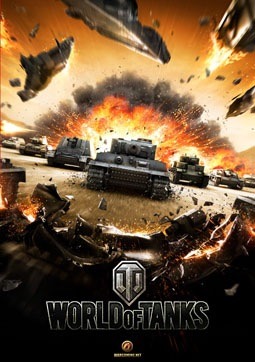 is a MMO Vehicular Combat game based around... well, what do you think?! It features hundreds of Soviet, German, American, French, British, Japanese, Chinese, Czechoslovakian and Swedish tanks.

You start the game with very basic tank designs barely worthy of the name and proceed to work your way up the tech trees. The tech trees themselves consist of a mixture of vehicles that saw service in their respective armies and vehicles that only made it to the prototype stage or never made it off paper. note The vehicles that did see service often have upgrades available to them that were never adopted in real life, in some cases because they simply couldn't make it fit. All the vehicles featured have been extensively researched and their in-game characteristics are based on their real-world counterparts. Despite that, the controls are relatively simple, and it is most definitely not even anywhere close to being a hardcore sim. The range of tanks available stretches from the 1920s (with a single tank from 1917note  The Renault FT, the first tank available in the French line , and its many derivatives) to the 1960s and 1970snote The later Swedish Tank Destroyers are 70's models.

, was released in May 2014, for iOS and Android. A card-based MMORTS Spinoff, World of Tanks Generals

by Wargaming.net. There also are spinoffs World of

Warplanes and World of

Warships which is the same idea, but with warplanes and warships instead. In 2020, World of Tanks partnered with Tabletop Games publisher Gale Force Nine to release the World of Tanks Miniatures Game

, a tabletop model wargame based on the ruleset of Tanks (it self, a small-scale tank skirmish focused game spun off from Flames of War) with World of Tanks themed changes to gameplay, and with 20 vehicle models released in its first year of sale.

The Girls und Panzer anime by Studio Actas is often considered to be The Anime of the Game. In a move that surprised no one, the makers of the game and Studio Actas will cooperate in creating in-game exclusive content related to the anime

in celebration of the creation of a Japanese server cluster for the game. The game is also getting an official Comicbook Adaptation, "Roll Out", written by Garth Ennis and drawn by Carlos Ezquerra (both already veterans of tank warfare stories from Battle and Ennis's Battlefields stories), and starring Cromwells in the Battle of Normandy. Wargaming also has a collaboration with Swedish Power Metal band Sabaton, who are fans of the game: they have provided CGI for several music videos and loaned them a filming studio for a number of episodes of their Sabaton History YouTube series, and two special editions of the Swedish Centurion with Sabaton-related livery are available in-game.

"The Attack of the Dead Men"

Swedish heavy metal band Sabaton kidnaps Radio Tapok for covering their songs, and has him do one of "The Attack of the Dead Men", which concerns the 1915 German gas attack against the Russian Army at Osowiec Fortress (modern-day northeast Poland). The battle scenes are from the World of Tanks YouTube channel.

"The Attack of the Dead Men"

Swedish heavy metal band Sabaton kidnaps Radio Tapok for covering their songs, and has him do one of "The Attack of the Dead Men", which concerns the 1915 German gas attack against the Russian Army at Osowiec Fortress (modern-day northeast Poland). The battle scenes are from the World of Tanks YouTube channel.