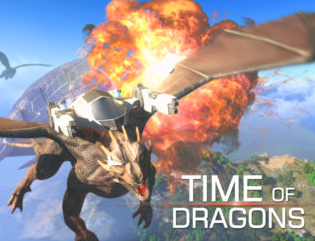 Time of Dragons is a massive multiplayer battle game that features, well, Dragons. It has a playstyle similar to that of games like War Thunder or World of Warplanes, just, it has Dragons instead of planes.
Advertisement:

The game was developed by 4 i Studio and released on February 1st, 2016. It is free to play, and is available

Not related to War Dragons, which is a mobile Tower Defense game.