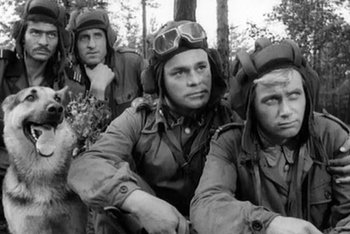 As advertised.
Czterej pancerni i pies ("Four tankers and a dog") is a Polish WWII adventure series based on a book by the same title, running three seasons (1966, 1969, 1970). It focuses on the adventures of the eponymous tank crew, consisting of four soldiers and a dog. Effortlessly blending lighthearted humour with action and a dash of war drama, it instantly became a hit in Poland, prompting the author to write two more books and adapt them into screenplay for the second and third season. Nowadays it's heavily criticized for its pro-Soviet propaganda, but remains a cult classic, especially for older generations.