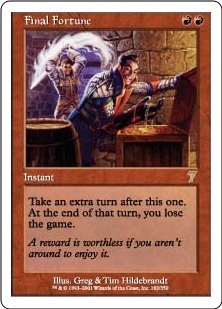 In video games, this is a high-risk/high-reward attack or strategy that, if it works, it hits for massive damage. But if it fails, you either are going to eat a painful Counter Attack or will have crippled yourself in some other way. The penalty is much more significant than just wasting the move.

Can also apply to attacks with long wind-ups that open the player up to counters.

Can overlap with Desperation Attack, but these can be done at nearly any time. Can become a Game-Breaker if the success rate is too high, or Awesome, but Impractical if it's too low. Some kinds of Alpha Strike may also manifest as death-or-glory attacks. For an even more extreme version, see Suicide Attack.

Strategy for Glass Cannons often centers around this kind of attack, since it allows them to prevent battles from being decided by attrition.

Ludwig unleashes an ultra-powerful attack... that can be sent back at him.

Ludwig unleashes an ultra-powerful attack... that can be sent back at him.