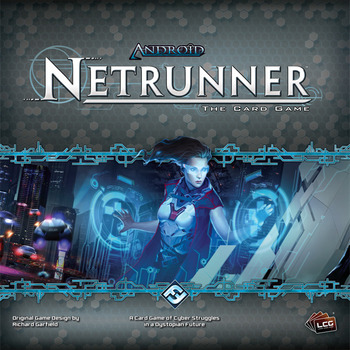 "The greatest casualty of the early corporate wars was the middle class."
— Flavor text for the Corporate War card
Advertisement:

Netrunner is a card game that depicts cyberspace combat between a global mega-corporation (the Corp) and a hacker (the Runner). The Corp's goal is to complete their secret agendas before the Runner can hack in and spoil their secret plans for world domination. It isn't easy, though, as the Corp has strong defensive data forts protected by malevolent computer programs known as ICE (once again short for Intrusion Countermeasures Electronics). The Runner must use special programs of their own (called icebreakers) to break through and steal the hidden plans - to keep the Corp from taking over completely.

The original version of the game was set in the Cyberpunk 2020 setting. In 2012, Fantasy Flight Games bought the rights to Netrunner, updated it to be consistent with its cyberpunk-noir board game Android, and reissued the game as the Living Card Game Android: Netrunner

. Though there have been some changes (making the game an LCG and not a CCG, of course; providing "identities" for the Corp and the Runner, each with their own abilities; lots of flavor text overhauls with references to the Android universe as well as lots of other sci-fi and fantasy), the game has been very well received. The game has both a core set and several expansions of varying sizes. On 8 June, 2018 Fantasy Flight games announced that Wizards of the Coast would not renew its license and is ending its partnership. It was continiued by a fan organization NISEI (Nextrunner International Support & Expansion Initiative).