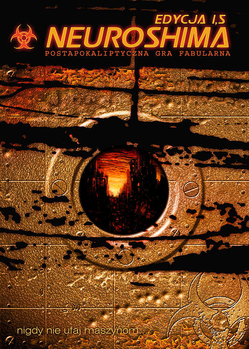 Neuroshima is a Polish tabletop RPG, heavily inspired by everything post-apocalyptic.

The game is set in the United States in the mid-21st century, after a nuclear war started by a cybernetic revolt turned the continent into a barren wasteland. The military artificial intelligence responsible for the war, commonly referred to as Moloch, now has control over a net of old military facilities, automated factories, power plants and alike, covering the whole northern U.S., from Oregon to the Great Lakes. Advancing north from Latin America into the southern states is the Neojungle, a mass of semi-intelligent carnivorous vegetation that grows faster than kudzu. Caught in the middle are the surviving humans, trapped between the deadly creatures and robots created by Moloch on one side, and wild animals mutated by nuclear radiation thriving in a hostile jungle on the other. But what is stressed in the book is that the worst enemy of humans is within them: hatred, indifference, and greed.

In its heyday, Neuroshima was one of the most popular, if not the most popular tabletop game in Poland, but the popularity quickly disappeared after support for the game ended, leaving it in a half-finished state. In spite of taking place in the United States, the game treats them as a simple, almost fantasy backdrop, with content that is very Polish in its nature.

The game spawned a much, much more popular successor that managed to have multiple editions and eventually got turned into a video game: Neuroshima Hex!.