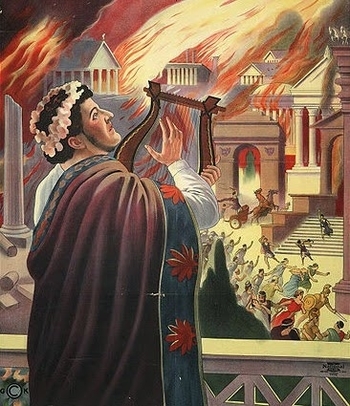 Because any disaster needs a little ambient music.
"The earth died screaming
While I lay dreaming
Dreaming of you."
— Tom Waits, "Earth Died Screaming" from the album Bone Machine
Advertisement:

Something awful is happening. The world is ending, the economy collapsed, there's an earthquake, and rioting in the streets is commonplace. Everyone's in a panic — except this person.

They're still reading a book, listening to music, browsing this site, whatever. Maybe they just don't care. Perhaps they approve of what's going on, or even masterminded it and are letting their Evil Plan come to fruition. On the other hand, maybe they figure that if they're going to die, they might as well go out with quiet dignity rather than in a panic or with Rage Against the Heavens. If combined with Dissonant Serenity it might have heroic or stoic overtones.

The trope is named after Roman Emperor Nero, who is purported to have been singing and playing his lyre (not what we call the "fiddle" despite Pop-Cultural Osmosis) while Rome was ravaged by a massive fire (though there are no detailed accounts of the fire from contemporary historians, thus there is debate about how true that is), and as such implies an authority ignoring the pleas of its subjects, or simply not caring enough, although it has broadened to mean simply carrying on as normal when the whole world falls to pieces around you.

Compare with Holding Out for a Hero, Refusal of the Call, Achilles in His Tent, Cosy Catastrophe, Slept Through the Apocalypse, and Strolling Through the Chaos. If the survivor seems to be actively enjoying the destruction, see Dancin' in the Ruins and Conducting the Carnage. If it's more an example of heroically attempting to avoid letting nasty situations get you down, it's probably Screw the War, We're Partying!. If someone tells them This Is No Time for Knitting, whatever they're doing is likely an attempt to save the day. Not to be confused with Stiff Upper Lip, where people aren't in denial of the problems around them. Opposite of sorts of Watching Troy Burn. Contrast Crying Wolf and Mistaken for Apocalypse. See Watch the World Die, while this is about not caring the world is ending, that trope is watching it from a safe vantage point. Compare Last Day to Live.

That's Regina George for you.

That's Regina George for you.