Dancin' in the Ruins 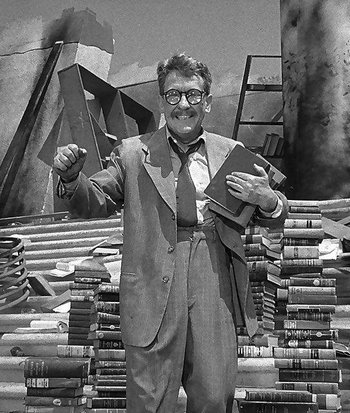 Seldom has anyone been so happy to experience the end of the world.
Go and get your riot gear,
swing your girlie all around.
We'll be dancing on the cinders
as the town is burning down.
— Five Iron Frenzy, "Get Your Riot Gear"
Advertisement:

It's not hard to spot this guy (or girl) in an After the End setting: he's the one dancing merrily on the grave of civilization. What his particular beef was with society may vary, but in all cases he's overjoyed to have seen it bite the dust. He's not typically the one responsible for the big boom, though he might want to shake the hand of whoever is given the opportunity. Could possibly be considered a slightly less insane version of Put Them All Out of My Misery.

Compare Crazy Survivalist, Loners Are Freaks, Put Them All Out of My Misery, and Conducting the Carnage. Might become the Token Evil Teammate or the Sour Supporter if he decides he has reason to join up with a group of other survivors (highly doubtful, though).

See also While Rome Burns, where the survivor may not be enjoying the carnage, but they certainly don't seem to mind it much.

Alternative Title(s): Dancing In The Ruins