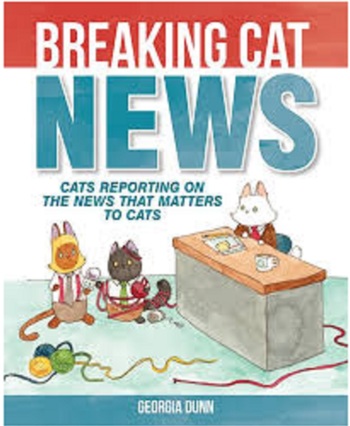 Lupin, Puck, and Elvis being their usual catty selves
A webcomic about the three cats Lupin, Elvis, and Puck, drawn by Georgia Dunn, owner of three real cats with those names.note Later joined by orange tabby Goldie, who's portrayed as a detective and investigative reporter; later adoptees Iggy and Ora Zella have yet to appear in the strip They act like news anchors, and encounter other news agencies and recruit new cats. The cats act like normal cats in all other respects, and the comic is inspired by the antics of their real-life counterparts.
Advertisement:

. It is also syndicated at GoComics here

. At the time of writing GoComics plans to offer the comic to newspapers as well. As of January 2022, about 150 papers have picked it up.