Our Werebeasts Are Different 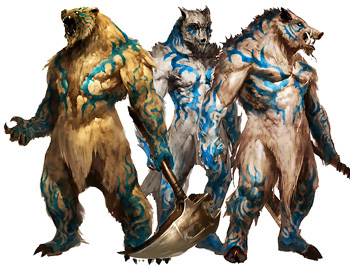 Werebears, Werewolves, and Wereboars, oh my!
"I'm looking forward to two fantastic monthly events now. One of which turns me into a vicious monster and the other one into a were-cat".
— Katie McBride, The Wotch
Advertisement:

Werebeasts are creatures that can transform between a human (or at least humanoid) form and an animal or animal-like form. They are also known as "werecreatures" or "were-animals". The prefix "were" comes from the Old English word "wer", meaning "man".note There is also "wyf," the Old English word and prefix for "woman," and "man" was originally the gender neutral term for Homo sapiens. The classy term for this is therianthropy, from the Greek words for "beast" ("therion") and "human" ("anthropos"). Such creatures can be found in the mythology of many cultures, and the myths have inspired the frequent use of werebeasts in modern Speculative Fiction, particularly Fantasy and Horror.

By far the most common form of werebeast depicted in fiction inspired by European folklore is the werewolf, but many stories use other animals as the basis of their werebeasts. Some of these are inspired by pre-existing mythologies and others are purely the invention of the authors. Other than wolves, potentially dangerous predatory mammals such as big cats, hyenas and bears are the most frequently depicted werebeasts, but many other types of creature have been used as the basis of a werebeast — wereboars and wererats, for instance, are far from unheard of. Sometimes authors use normally harmless creatures as the basis of a werecreature for the sake of Rule of Cute or Rule of Funny. Some works will even use extremely unconventional ideas such as werecars. It should also be noted that while werebeasts normally have humanoid shapes as their default form, sometimes a work will reverse the order and make a werebeast an animal that transforms into a human. The wolf version of this is sometimes called a "wolfwere". Taking this to it's logical conclusion and featuring something like, say, an ant that turns into a spider or a mushroom that turns into a mold is however, unheard of.

Egon gets turned into a werechicken after being bit by one.

Egon gets turned into a werechicken after being bit by one.