The Oldest Ones in the Book 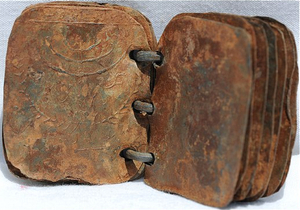 The movie adaptation is probably going to take some liberties.
"History merely repeats itself. It has all been done before. Nothing under the sun is truly new."
— Ecclesiastes 1:9, The Bible
Advertisement:

A historical note: Several of the listed milestones in tropes existed well prior to the appended dates but either had minimal impact or were lost in later years. For example, movable type blocks existed in Greece around 300 BC but did not have the same impact on history as the Gutenberg Press. Older Than Print is simply short-hand for the more accurate trope name as Older Than The Widespread Adoption Of Movable Type To The Point That It Had A Widespread And Irreversible Severance From The World As It Was Before is rather difficult to type.

See also The Oldest Tricks in the Book, Older Than They Think, and Ur-Example. Contrast The Newest Ones in the Book, tropes that have existed for a short period of time (1980 or otherwise). For the oldest ones in the wiki, see the Time Immemorial Index.

Alternative Title(s): Oldest Ones In The Book, Classic TV