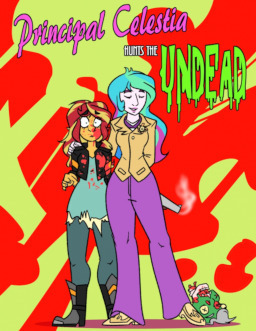 Celestia's got red on Sunset.
Advertisement:

is a My Little Pony: Equestria Girls fanfic, and the first in a series. Originally posted January 4, 2016, it was completed February 4, 2017. Its sequel, Sunset Shimmer Hunts The Undead

, is a series of episodic vignettes set around the same time and after Sunset Shimmer; it was started on April 11, 2020 and was concluded on September 17, 2021.

The story begins as Sunset confronts Principal Celestia and Vice-Principal Luna sometime after the Friendship Games, pointing out how, despite all the weirdness that's happened, they don't react like normal people do — i.e., calling the cops or military in on things. That's when she finds out that the sisters and some of the other school staff have been hunting monsters around Canterlot for years, and they know how to handle them. Sunset promptly decides to join the group. Slice-of-life adventures with a band of monster hunters ensue. The sequel picks up two years later as Sunset heads off to her second year of college.

A Band of Misfit Losers Hunt the Undead

A Band of Misfit Losers Hunt the Undead provides examples of: