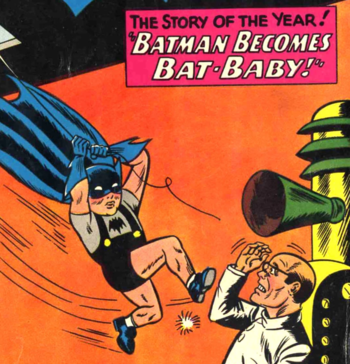 Sometimes an episode will come along where, through some means, one or more than one of the characters is transformed into an infant, requiring their friends to find a way to turn them back.

This is generally done by either magical or technological means (such as taking a potion or being hit by a ray). Sometimes, a villain or trickster character turns them into a baby on purpose, but other times, a hero or a background character is using the magic or technology to attempt something different and accidentally turns the character into a baby.

Sometimes, the character still has some or all of their adult mind, making them a Brainy Baby, but other times, they have been completely transformed, meaning that they cannot do things they normally would be able to do, which means that the other character might have to find a way to turn them back quickly because something is coming up that requires the transformed character's skills. Also, now that the character's a baby, they're dependent, which means that they will have to be, for lack of a better word, babysat until the change can be reversed. This "babysitting" might lead to Cringe Comedy. (e.g. "I don't want to be changing my friend/boyfriend/girlfriend/spouse/parent/etc's diapers!")

Depending on the transformation, sometimes the baby's clothes will change to fit them but other times, Shapeshifting Excludes Clothing so the other characters must find some clothes to dress the baby in (sometimes an Improvised Diaper).

Often overlaps with Parents for a Day, and always overlaps with Fountain of Youth. If this is done to a villain it can be an attempt at Raise Him Right This Time (especially if it becomes permanent).

Jimmy's youth tonic ends up working a little TOO well on Granny...

Jimmy's youth tonic ends up working a little TOO well on Granny...