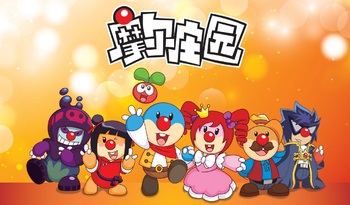 Mole's World (摩尔庄园) is a Chinese virtual world game released in 2008 that got updates until 2015. The characters have appeared in various games of other genres in addition to animated series and other media.

The hardworking moles and their pet lahms used to live in the beautiful Black Forest. After the forest burned down in a fire, the moles moved south and built a new manor from scratch.

Players control their own moles in various different settings. They can get their own clothing, vehicles, houses, and pets. They can go on missions and participate in various social games and activities with their friends.

It has an Animated Adaptation revolving around the cheerful mole Molele and his pet lahm Lazai. Molele lives with his uncle Bodhi. He's also friends with the princess Momo, the girl Yali, and the twins Duoduo and Shaoshao. The main antagonist is the evil master magician Kula, who uses powerful magic to cause trouble with the aid of his lahm Shaiza. When Molele's friends need help, Molele transforms into the superhero Mole Man to save the day. However, Molele doesn't actually know that he's the same person as Mole Man.

It has the following films: